Easter on the Farm- Lower Shaw Farm of course!

A Busy Weekend with lots of activities. This is Jake ( British Slacklining champion) on his high line- terrible but wonderful to watch (but worse for his parents!).I didn't realise this was his first high line performance with audience-and it did sound like he did a very 'tame' performance compared to his 'normal' stuff- I appreciate that. He had a safety harness on, but also reckoned for what he was doing he would have caught himself had been going to fall- I'm sure his parents appreciated the extra safety level- I know I did! Wow.exhausting and exhilarating to watch!
He had a very sensible low slackline for everyone to practise on in the play barn, as well as sharing circus skills with anyone interested.Big One's personal best on the slack line unaided was nearly 4 steps. 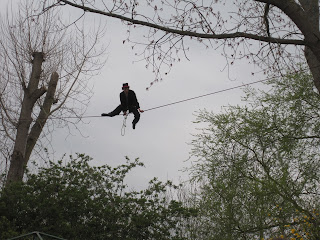 We had an East bonnet parade down the lane Sunday morning: 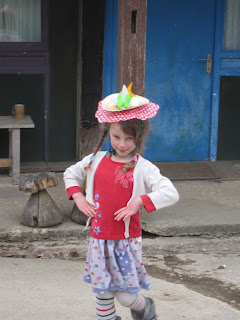 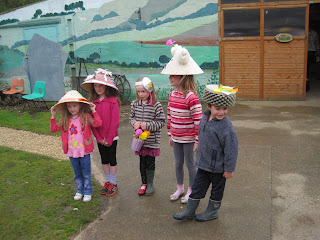 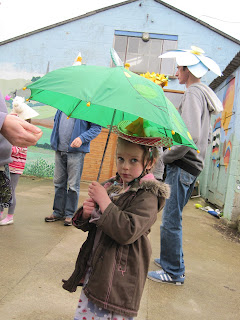 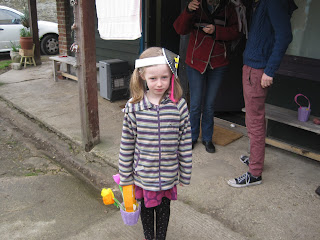 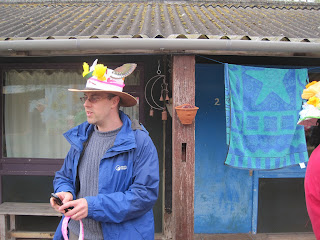 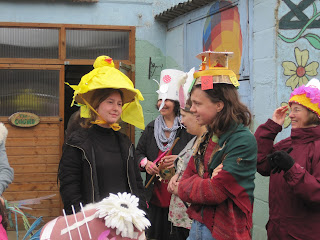 As well as Egg Rolling at Avebury Sunday afternoon, which was really fabulous. Hard Boiled duck eggs last the best, though the dry conditions meant that not many eggs managed the 10 heats. Our girls decided their eggs were far too precious to roll (grrrr! but they were exhausted so the first crack would have meant hysterical tears) so we're hoping they dry out nicely instead.
The eggs came courtesy of the Easter Hare (we decided his odd behaviour and looks make him more likely to be a hare- just some townies can't tell the difference between a hare and a rabbit, lol, so the bunny name sticks) who hopped quickly out of sight but left all the under 20s at the weekend a gift. Big and Little One's bags were well hidden in the garden, so nearly the last found but thankfully they turned up- phew!
There were many crafts for all ages-  making your easter hat,egg blowing and decorating, marzipan animals, creating with felt, lino cuts, umm- I think that's most of what the girls did, but I wasn't quite up to taking part in much. They loved Jake's circus skills with diabalo (Big One had a good go at that), juggling, hula hooping, and kids of all ages were taking turns with the slackline- one of the teenagers was really getting the hang of it. Big One stayed up late for songs one evening, and the first evening had the chicks hatching so the next day Big and Little got to hold a newly hatched chick- by a couple of days old they were a bit lively for holding!
Animals were fed and moved around the farm, eggs were collected, puddles splashed in, new friends made- it was a really lovely break.
This morning Big One told me she had three favourite bits: making new friends (one especially who I must find the email address for!), blowing the eggs and feeding the animals.
Little One was busy when we were talking, but did say she liked the animals.
DH definately had fun, so he must have enjoyed washing up and sneaking off to teach a new friend some greenwood skills.
I enjoyed it all happening around me, that everyone was happy and Matt told everyone off for trying to help keep the wood fire going- so I sat near it and crocheted!
There were families of all shapes and sizes, and other folk too- what I really liked was how littles ones and teenagers, grown ups too all joined in and did the different activities if they wanted to. Some of us didn't, and it wasn't a problem at all, but seeing how much fun the teenagers were having was really great.
We also noticed there were quite a few teachers/lecturers there. Don't know what that means.... but we weren't harassed/criticised for home edding- we had some lovely, interesting conversations about education, in the UK and abroad.
Posted by abusymum at 11:52