I went to work today- and I didn't need to. I'd booked some annual leave a few months ago, planning that I'd need some time to pack and get organised, but forgot to write it down. As it happened, they'd booked a patient at my start time anyway, so I had something to do for half an hour, and then I came home. I'd have been annoyed if I had a commute, but at a two minute walk I can't really complain, and it was lovely finding out I had extra time, and I have tomorrow off as well! I won't make the same mistake tomorrow...
I've had a lovely day, which I'll say more about later. When I got the photos off the camera I realised I'd not shared us making Flowery Foot Powder from The Holistic Beauty Book :
Firstly- this wasn't made for any necessity or desire- purely that I had offered to use the grinder to make curry powder with the girls, only to find we were out of coriander ( and it just isn't curry powder without coriander)- and this was the first thing I found I thought we had the ingredients for at short notice!
The main ingredient being flowers, rose petals (bought) and lavender (home dried): 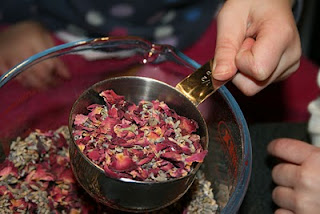 I had some help: 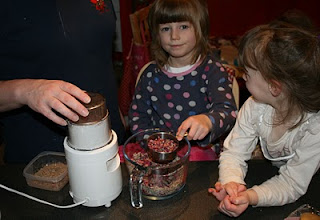 And a shot with the ground flowers: 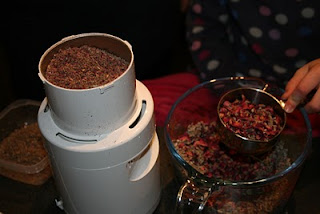 It smells lovely, incredibly messy to use with small children, and very obvious when its all over the bathroom floor!
I've had a little time to do a bit more crochet while the girls chose to stay playing at a soft play place for hours- and I still had to drag them away- we'd been the only folk there for ages too! Anyway, I have now learned how to change colours which was something new for this week. 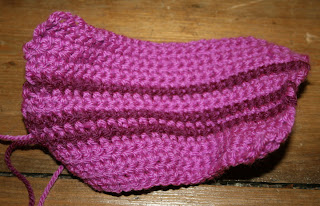 A neighbour returned  a book today, which personally I think all expectant mums should have access to. I had no idea about what was behind the low breastfeeding rates in so many places- that we are all exposed to so much marketing its no surprise so many mothers have no choice ( or feel they have no choice) but to use formula, and as a culture 'not breastfeeding' has been the norm for so long today's grandparents have no breastfeeding experience either- my friends mother-in-law came out with the classic 'its just not natural!'. Although I have been aware of people boycotting Nestle for years, now I actually get why its worthwhile to deprive us of Smarties and Aeros (you can get non -Nestle alternatives!). I can't explain it well- you'll just have to read the book! 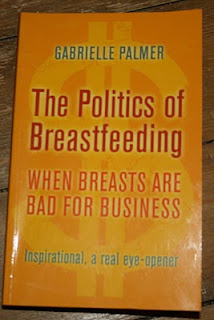 In a similar vein, my Moby slings have come home for a few days, ready to pass onto the next mum: 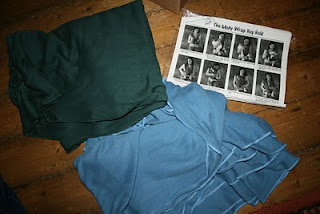 Something I think all maternity units ( or some other stretchy wrap, other brands are available, lol) should introduce all mums to- I remember being taught how to bath a baby (which seemed incredibly faffy, I preferred the 'getting into the bath with baby' version that I figured out for myself) but its would have been much more useful to know how to use a stretchy wrap. I heard of them before Little One, so got myself to a sling meet and bought a cheap one off ebay before bump landed. I was very glad to get good advice, but the downside is seeing so much of what is out there, and there are so many lovely slings out there!


We order food from Suma, and we're stocking up for being away. They have had a special offer for customers of a goody box for the New Year, with orders before this Friday: 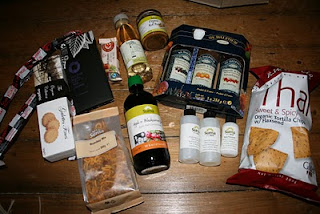 The Goody Box was advertised as being worth £25, and I'm impressed with it all- we ate the spaghetti for tea ( nice, not too smooth so the sauce sticks to it!), so that's not in the picture. The only thing we won't eat is the liquorice, but we probably know someone who'd like it...
We used to order with neighbours as you had to be a business to order wholesale, but they now recognise you might be a neighbourhood co-op and order with friends, so anyone can order (you need a customer number to see the prices on the wholesale pages, which have different quantities and prices to their retail page). We usually ask around relatives and sometimes remember to ask friends if they want anything, but we order enough for it to be worth our while. We get 3% discount for collecting as well, so it all adds up, enabling us to get organic 'things' that we might not otherwise be able to afford to get organic.
Anyway, that's part of the nice day, but the other bits aren't pictures. Seeing DH and Big One playing fireworks, Big One picking up a picture dictionary and asking questions and sneakily learning things (which kind of camel has two humps anyone?). And I've had a holiday- I was instructed to work on a jigsaw I'd like to finish before packing it away, so I did. DH planned a swimming trip this afternoon before we found out I wasn't at work, so I took her swimming while DH did other things. Apparently its different going with me, but we both had fun and I'm worn out! Later Big One got some rice out to play at making pictures, which DH joined in ( I was distracted in the jigsaw again), and not only did we tidy up enough to find some floor, we even found the vac again so a small amount of what I think may be termed 'housework' happened. Wonders will never cease!
We've also got another week arranged through WWOOF, though it sounds a bit tight for getting our van to it....
And we're getting some time to go visit http://www.portlandworks.co.uk/events/  while the girls have quality time with Grandparents. I nearly rented accomodation at uni round the corner from there...but that was many, many moons ago now.
Posted by abusymum at 19:06