We spent an evening and a morning making Christmas cards from various left overs, stickers and a bumper pack of cards. Big One especially had a wonderful time, reduced to tears for having to stop for bedtime, and she's still offering now to make more if I find I need more. Most were posted before I even thought of the camera, but these are three she has chosen who they are for. Though there were four, so I wonder if one has been posted to someone else by accident.... 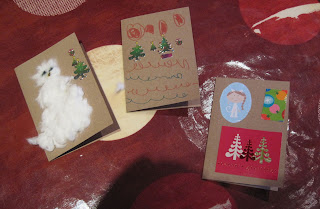 I have started to put things together for the hampers we intend as our Christmas gifts this year- this is one destined for someone highly unlikely to look here, so I think I'm alright showing it!
I'm copying Robin Woods line of using wood chips as packing material- these aren't being posted anywhere, so even though our wood shavings aren't as fancy, they'll still be functional. 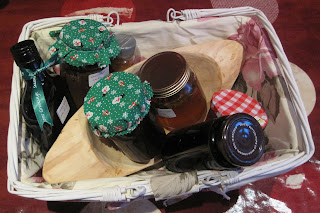 I grew up in Canada, and one essential ( along with ice skates and skis- snow shoes were only tried out once at school that I can remember!) was the toboggan. Mine came back with me when we moved, and has been sat in my parents garage for about 20 years.Its in need of some TLC and another cross-brace, but is functional enough for my two. It was quickly located for the first time on Christmas Day last year, when Big One and DH had spent Christmas Eve in our tent with woodburner listening for Santa, and funnily enough noone else was on the sledging hill Christmas Day Afternoon ( Little One was too little to enjoy it, but Big One had a fab time!). We're keeping it handy in the van for further snow adventures, as the van has been snowed in and my parents garage isn't that handy for us to walk to. 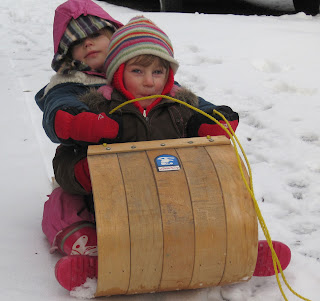 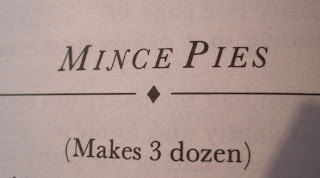 We had a go at making mince pies. I have limited imagination, so I follow recipes. So, this was mince pies courtesy of Delia. With mincemeat courtesy of her too. Usually my pastry is fairly uninspiring, but something- no idea what- went incredibly well. 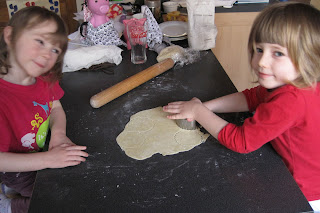 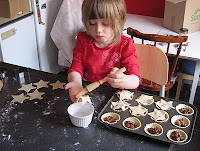 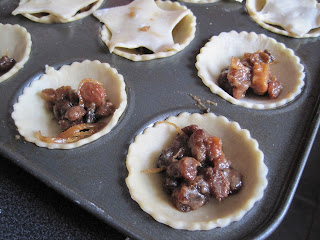 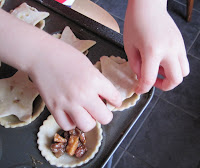 So this is as close as you get to seeing a baked one! Oh, the mix made 3 dozen plus 2, plus a small amount of pastry for Little One to make 'biscuits' with. They were baked in the oven for a few minutes around the last 2 mince pies, and both girls loved scoffing them and want to make more. Little One won't eat the mince pies- well, after seeing me and Big One scoff so many, she graduated from eating the points off the stars to poking through and finding the raisins in the mincemeat- she spat out the orange zest in it. I do enjoy how different in taste the girls are!
This weekend we also found an excuse for DH to try out the chainsaw he bought last week ( he got all the protective gear straight after his course, but decided to wait a bit for the saw) but I suspect he'll have blogged about that.
As a result, I've started work on a spoon-tula, but thought I'd blog instead of being dangerous with a knife tonight.
From a couple of months ago- a great use of an Ikea cheap wok and a few curtain brackets. I was most impressed! 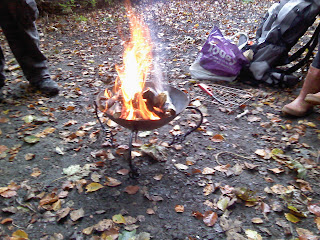