I've just spent 2 hours finding photos, getting them off the camera and ready for the web, only to have problems getting any onto this blog. Finally got three of 18 up, only for my browser to crash and lose those three. grrr doesn't quite do it so I think its wine o'clock!
So, the last month or so has included sourdough bread, some not quite as successful in looks but still went down well.
We've been harvesting, both from pots in our yard and the allotment. We haven't been at the allotment much this year, so hardly planted anything ( the in-laws did loads) and not been tending to it so we're lucky to have anything with the size of the slugs we grow! 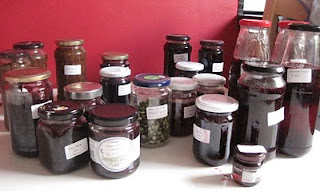 This was the first round that had to go to the cellar, our kitchen cupboards were overflowing! I've found a huge jar that takes all the elderberry liqueur, so that and the tincture are in the kitchen so I hopefully remember to give them a shake, but the rest is out of the way now. I'm hoping these will be Christmas presents, with a few left over for us. Jam is off the shopping list! A couple of good friends came over last week, and sounded interested enough that they've taken a jar each of chutney- the recipes said wait a few months but I wonder when they'll give it a try? It smelled good when cooking, and once it was in the jars the pan scrapings were ok, so I'm hoping it'll be lovely in a few months. As someone who hasn't often strayed far from Branston's pickle, I'm not really a connoisseur.
We've still been keeping nice and busy, and just back from a 4 day camp in Edale where DH was learning spoon carving from  Robin Wood. We all have a fabulous time, and I've been able to start on another bowl, and keep going with my horse-chestnut bowl. DH has been sharing his new knowledge so I'm working on getting a good edge on my tools- apparently I've been doing it all wrong, sigh.
I'm back at my sewing class so I've made a cushion cover, and have a pile of ideas to make, and the jam and chutney cupboard is getting rather full. I'll be editing these last posts when and if I can get photos to appear.
Posted by abusymum at 22:20