Another sunhat, and bread...

The finale of the sunhats -I hope! 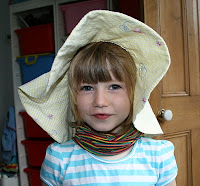 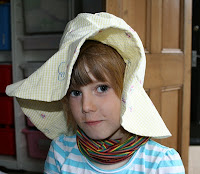 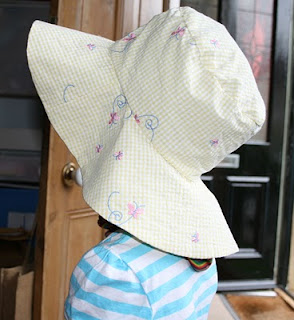 It does have a HUGE brim- all the better to keep the sun of her neck, but mum-in-law suggested a great fix: 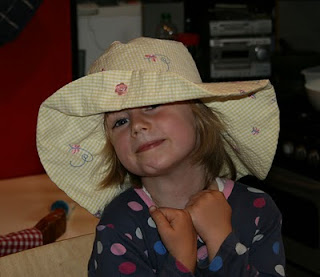 with a button on the brim!
I'm really chuffed with it- I've selected the pattern, sized it (albeit accidentally!), sewn round circles, learned to used stiffener (I've forgotten what its called at this time of night), got right sides together, and its even lined. I haven't had to ask anyone for help- which I really didn't expect after the last 3 attempts.
This week I've been patiently feeding my starter (leaven)  for sourdough bread, and it was ready today:

I didn't manage to follow the recipe timings religiously, something I try to do for first attempts at least, so it had one less kneading and about double the suggested rising time. That didn't seem too much of a problem.
Our oven, despite being the recommended temperature (I have an oven thermometer- get me!) cooked the bread much quicker than the book said, only about 35-40 mins instead of 50-70 mins, so it has a 'well coloured crust', and a great but not very different taste to our usual homemade bread. I guess the leaven is really quite young yet, hopefully get stronger as it gets older.  The husband reckons the texture was nice, a bit like crumpet, and Big One just kept eating it, so it must be ok!
My leaven has also escaped from the jar, it did it last night and looks like its on its way again tonight. Hopefully a night in the fridge and I can have another go Tuesday, a days holiday to catch up a bit.
While I was waiting for the leaven to be ready, I had a go at milk loaf, apparently its a British Thing. I remember stacking the round loaves of it when I worked in Asda, but know nothing else of it. Anyway, my version got a bit well travelled- made in one house, transported via supermarket (for butter for the dough) to the other house for rising and baking. It should have been in one tin, but I put it in two and thought I'd killed it- it looked flat as a pancake going in the oven, so an edible loaf (or two) was a nice surprise. 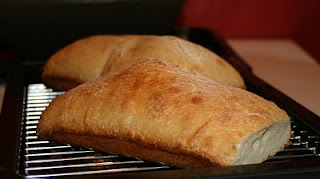 I forgot a brush, so a bit of milk was sloshed over at some point a bit late in the cooking, which I reckon is why the sides are darker than the top. Really lovely tasting bread though!
I'm a bit brain dead tonight, I think I'll stop here and get some sleep.
Posted by abusymum at 22:18