It's been my birthday. I can remember last years quite clearly- it was snowy, it wasn't half term ( a rarity) and, as it wasn't a school holiday I was able to have the day off work. So, I had the week off work and went to learn how to carve wooden bowls with Robin Wood. I had a fabulous time, and this last week I've been able to get the axe out ( I really love my carving axe!) and do another little one.
There's a story with it though:
Last week I had a day off and planned to do a bit of 'wood'. DH had been itching to use his chainsaw, so my parents kindly found a cherry stump that required some help. 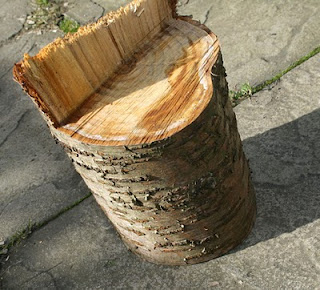 I naively thought that sounded good, I could have a go at a little bowl from that. Well. DH said it was a little hard work cutting a short length off with the chainsaw, but I eagerly got the splitting axe and tried to split it. I tried quite hard, then admitted defeat and called DH to help. Two of us putting serious welly into it, got about 1 mm into the end of the log.


DH then recalls Robin mentioning that cherry did beautiful spoons, but it was hard on your hands....we agree. If DH can manage to chainsaw a blank out of it he might try a spoon, but he's not sure his chainsaw ( and him) are up to that challenge!
Anyway, we had a bit of old willow around, and DH and I easily split that in 2 seconds flat- a good learning curve for how different wood can behave. 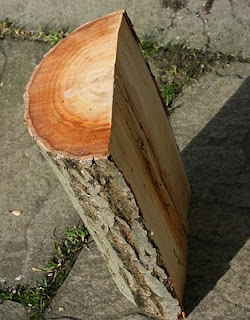 Lovely little bit of wood. Can you see a bowl in it? I could.... 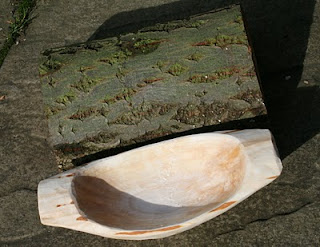 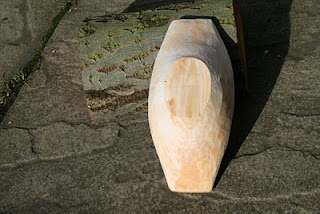 Although it isn't finished yet, DH has been able to to teach me a little about knife handling- no cuts at all, and the only blood from a grazed knuckle which always happens when I start splitting wood. This bowl is quite small, so I didn't use my carving horse (handy as is moved to our next temporary abode ahead of us, and hopefully travelling around the UK with us if we've space for it in the van)and after the initial adzing just used the bowl gouge a little before using my curved blade that Duncan made.
Unfortunately I've found another learning curve- my sharpening skills really need some work. I've had repeated attempts, but everything I've sharpened leaves little scrapes, and although it'll have sharp spots, it'll have more dull ones. I reckon DH could do with some practice as well, so I've asked him to have a go at sharpening- then I can finish off the inside of my bowl.

Onto another topic completely....

I had a really lovely day the other day- and I was at work! I've started inviting folk to a farewell gathering, so more people are suddenly aware we're off on our travels, it really is happening, etc.
I was speaking to someone who works in a similar area, but different area at work, and I found it really inspiring. She works in an area where her personal beliefs are completely at odds with what she does, and she finds it a strength. She knows her clients get a really clear explanation of risks, possible repercussions and the options put in front of them, because she ultimately believes everyone should choose their own path- but that it should be a well-informed choice rather than being pushed into something without realising the potential consequences. I came away from a short conversation feeling a lot more positive about my work, and that realisation that other folk may not always agree with their work but can find the positive side to it, rather than complaining but doing nothing, or just being miserable and demoralised. I enjoy aspects of my job, but sometimes wonder about the 'making a difference' side of it being lost, and instead I'm working to tick boxes that 'this population gets offered x' irrespective of if 'x' actually makes a difference to outcomes, let alone improving outcomes.
I'm also hoping that when I return to work after our trip  that I'll be refreshed, revitalised and able to enjoy work more. I recall enjoying the novelty of working after maternity leave after little one, so I'm hoping I'll have that positive feeling, without the exhaustion of a little one!

Another tangent ( I've had an alcoholic beverage, I feel the need for tangents!)
We have a week and a half left in this house, before we move into my parents garden. This weekend is 'Moving' weekend, and I plan that we'll just be camping with the bare minimum of clutter around for the last week so the cleaning and final pack is quite straightforward. DH has other ideas so we'll see how it goes!
We also have the good news that our prospective tenants have leaped through all the hurdles the letting agents have thrown at them, and handover day is planned for the 4th March - yes, the same day we have to move out.
This means we'll not be liable for any utility bills, the house will be occupied, and the rent ( fingers crossed they pay) after agency fees should cover our planned (admittedly minimal) expenses for our trip- fuel, van maintenance and insurance, food for us and some holiday week camping fees. Day trips and meals out will be extra, but that's a huge difference to spending what we've saved over the last year. I think I'd better go look at prices to go visit my sister!

Final tangent ( but I've lost the picture, I'll add it another day)
A couple of weeks ago I realised the jigsaw board needed putting into storage, but had a jigsaw started. The time to finish it had come, so I got to have a peaceful time doing a jigsaw. Its a map one, and I enjoy finding new places each time I do it. And odd places- did you know there was a Starbuck Island?
I'm still plodding on with my crochet- I'm working on a square that's patterns done in treble crochet, and I've not got the tension right. It should be a square, but instead its very much a rectangle. Its a second attempt so I had hoped I'd figured it out, but not yet.
Enough tangents now!
Posted by abusymum at 22:23