Away from the Packing

Not technically mine, but Big One was busy with what we found in the bottom of a box- and made a farm with fencing and animals and people. She was busy for ages with it, and understandably upset when Little One walked in and kicked it. These things happen... 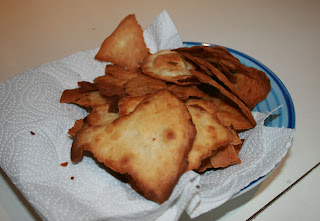 At some point, just after Christmas I think, I made some rather brittle flour tortillas. They didn't work too well, so the left overs got fried and turned into very yummy home made crisps. Much better than throwing them away!
I had a go ( from handmade loaf ) at picklets, one day when I woke up about 4 hours early. Plenty of time to have the batter rise for a couple of hours and have something fresh and hot at 8 am, before work... 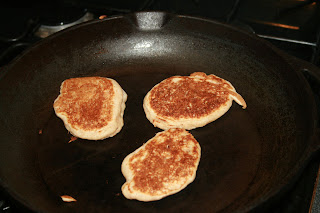 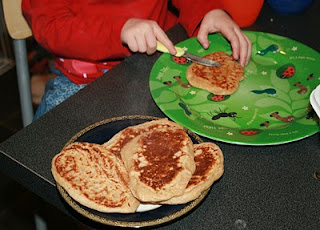 I hoped for something like crumpets, but they had quite a delicious bread taste instead. 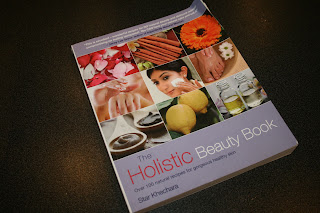 I read The Mother Magazine (makes me feel very mainstream!), and there used to be a column by Star in it.Its not often I'm tempted to have a go, but her column really interested me, so when I realised she had a book I bought it ( after debating about it for about 6 months!). Its taken me another 6 months to invest in ingredients, but we've had a go at a few recipes so far. 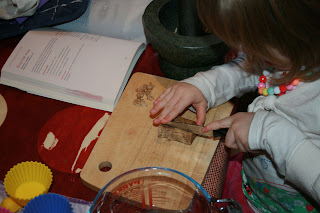 We first made some 'hair soap'- shampoo to me. Big One chopped the black soap, and Little One loves shaking the bottle whenever she sees it- not necessary but fun because of all the bubbles. I like the feel of my hair after using it, but I have a suspicion its not ideal for daily use. Not much to look at either! 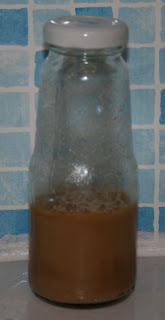 We (the girls actually did most of it) also made 'lipstick', highly technical involving vegetable glycerine and brambles from the freezer. Little One wasn't allowed to eat all the berries- Big One was definite we were going to make this! It has a definite flavour, which isn't sickly sweet for once. I'm not sure of how best to keep it, so its just in this plastic pot with fingers getting dipped in, which isn't ideal. 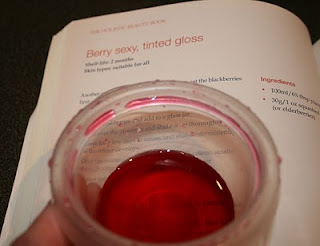 I've been wanting to try this since I got the book, making my own body spray. I've adapted it, using some jasmine oil as I haven't any infused flower water, and only making a small quantity to try out. My rose water is rather old, and I think it'll be worth investing in some fresh- but I think it smells quite good :-) 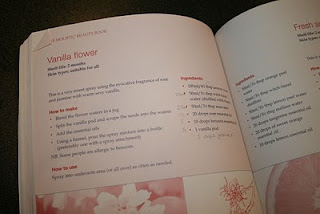 Not a very interesting spray bottle, but it does the job.I must remember that this has black specks in from the vanilla, otherwise I'll worry its past its best!

A few weeks back Little One was Very Poorly with a vomiting bug-the first 12 hours had me very tempted to take her to the hospital for dehydration, but she gradually stopped puking twice an hour and slowly improved. This of course coincided with having no hot water for the weekend, making handwashing painfully cold, let alone getting all over clean. We had to improvise, which thankfully worked well. 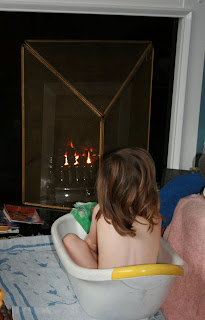 The following weekend we were away, Big One was slightly ill, but it was great that Someone was having fun with the marble run! DH's brother's girlfriend's son made some brilliant runs. 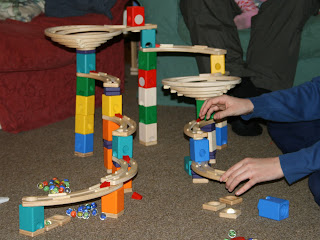 I'm sure I'll have mentioned getting a crochet book for Christmas, here it is: 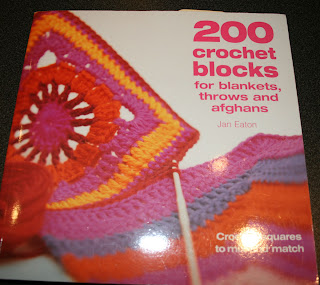 I have managed to make a fairly square 'square' ( Big One told me to make this). 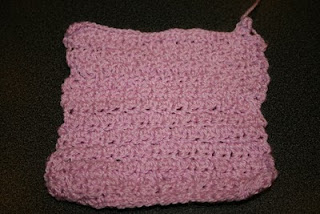 And our weekend away with family and poorly girl meant I had chance to really work on doing a few of the little flowers mentioned before. I like how quick they are, and how little girls just love them! 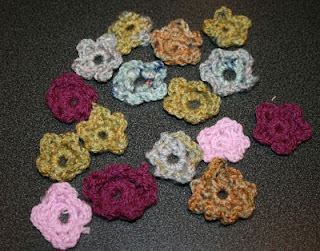 I must confess to not doing as I was told with this one. Big One told me to make a square, but I enjoyed the rhythm of this pattern and decided to keep going and make a scarf. I obviously cannot count ( well, its remembering to bother to count that's my problem) so this one is definitely staying with me. I've considered unravelling it all to make the edges straight, but I like to be able to show progress. So when I can make a scarf with parallel sides it will be worth shouting about! 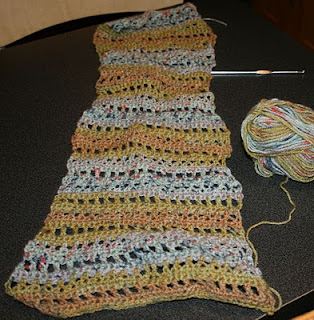 Now, I actually should be getting everything ready for camping for 7 months, starting in 4 weeks time ( head in sand moment).We had some foam mats made up to our size specification when we had a 4 m bell tent with a half circle as our sleeping space, which didn't fit in a double airbed terribly well. Our sleeping space is now huge with our 5 m tent, but we still have the same foam mats which we use however we need to.

I hope to add some Velcro so we don't slip down any gaps, but they work really well for us- especially once we bought a transit van to haul them around with us. They definitely take a lot more space than an airbed! They're quite dense, and should last us many years. Very kind and talented MIL made the first covers for some of the mats- the two largest and one of the little squares, which have been brilliant. Its a slippy water resistant fabric, which makes them a little hard to carry. My project has been covering the remainder of the mats, and sewing handles onto them all so they're easier to move. Luckily I went to a sewing class where the teacher really recommended Fabworks. I went in the summer, found loads of fabric for various projects ( enough for a couple of dresses for the girls, 3 doll slings, covering all the mats plus plenty left over for anything else, and a huge stash of fabrics that I have yet to think up uses for...) for only £10. the pricing was vague- I hadn't any real idea how much it would all be, but I really hoped it would be less than £40, just to give you a rough idea. They have many fabrics on the roll ( that's more clearly priced) but they also have different bins of remnants. Absolutely amazing place and somewhere, when I'm able to keep learning to sew, I'll definitely head back to.

My hand sewing isn't great, but I was pleased to spend one evening making the cover for a small square (I had MIL's to copy from) and get a handle sewn onto it. 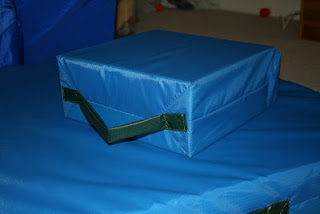 And, thanks to the generosity of friends we have plenty of cardboard boxes for the last few weeks packing. 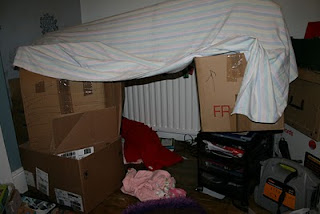 Which means the girls have a den for the time being as well!
Nearly forgot to mention meeting 10 day old Harry yesterday as well :) No pictures (his dad's pics are bloomin marvellous, so even if I had taken a camera it wouldn't do him justice), but one gorgeous little man with very chilled and happy parents!
We managed to go play in the woods today as well. We were only 2 hours late, so most people were a bit chilled, even with the lovely fire going but it was so nice just to see some friends again, even just to say hi and bye- I've felt too stressed to make time to see people and its made me realise I have to prioritise. There's no point counting down to going if I'm not seeing anyone while we're local!
Posted by abusymum at 21:34