I was talking to a friend the other day, and didn't think much had happened this week. However, I think I was in a bit of an exhausted haze and unable to think clearly (in my defense, I had to head to bed when we got home, and later went back to bed for 12 hours!).

We've had some of the usual  free play. It seems to involve more and more writing these days, from both of them. Daren't mention it though, I don't think they've noticed! 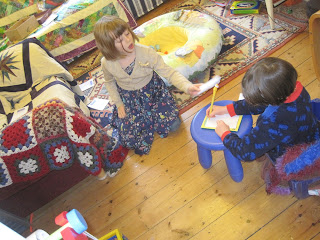 The K'nex has been rediscovered. And Rainbow is very interested in anything he can grab- we're officially evolving our baby safety with a baby who can lunge an amazing distance. 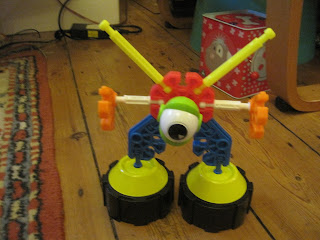 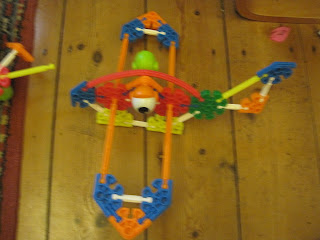 We got a set of 'I Wonder Why....' books from the Book People. They've not wanted to read them for about 5 months, but they are suddenly utterly fascinating. I really enjoy how the girls find things in their own time, and their own pace.

Its lovely Rainbow will go to sleep on my back, and let me concentrate on the girls, or get on with something else. Reaching to turn on the sewing machine does usually disturb him though, sadly.
Great Grandma is doing really well, and quite sprightly in her own home. Rainbow is getting a bit heavy for her, but they both seem to enjoy each other.

The girls had a fab day in a local play gym, with friends. I learned yet again, the noise of these places can really wear me out, especially after 3 or 4 hours. It was great chatting with friends though, and a lot warmer than the park.
We fit in a visit to Eureka this week. Our timing wasn't great- school groups 'take over' a lot during the morning, (especially when visiting with littlies) but next time we'll go about 2.30 pm- its lovely having the place almost to yourself, as the school kids all leave about then. 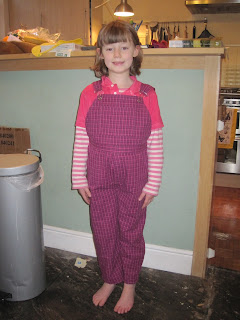 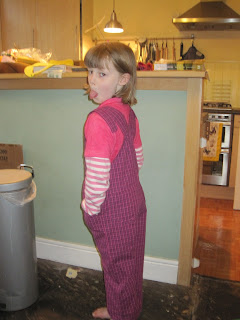 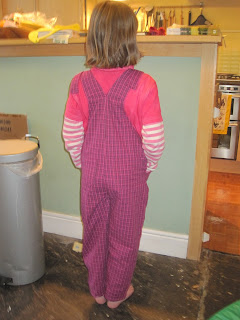 The dungarees I've been making are finally finished! I had a lot of pressure to get them completed yesterday, but despite the rush Princess is pretty happy with them. There are a few bits I wish I'd done differently, and I'm happy I've learned a lot about how to do various parts. I still get a bit confused with final construction of different aspects, but I'm getting there.I'm a bit frustrated at the poppers and fastenings I can get locally, I'm going to have to investigate online bits as these are letting down the finished item- the girls are struggling with the poppers I've used on both these and the trousers for Flower.
I haven't another project ready to go, so its a trip to Fabworks tomorrow so the girls can choose fabrics for some dresses they want next. I'll be looking out for some fleece to do hoodies, as I have a pattern coming soon. Another bonus to sewing class is reduced price patterns from one of the main brands, so I'm looking forward to them.

On a different topic, I must have mentioned my 'new-to me' magimix...
Its fabulous.


I don't use the Magimix for bread, I'm fine mixing that by hand, but homemade mushroom pate (link goes to the recipe mine is roughly based on- I use cream instead of cottage cheese) is amazing- I've only had supermarket version before, and this is much better. Princess has also met blades of mace- she's not seen that spice before, and she did a great job grinding the little bit needed for this. I don't use it often, and forgot how aromatic it is.
The girls are enjoying  helping with the magimix, and it means they can do a little more- they aren't so keen on grating (I'm a rubbish person to learn to use a grater with, I usually cut myself so they are understandably rather wary).

We are expecting a death in the family- One of the fish isn't looking so well. 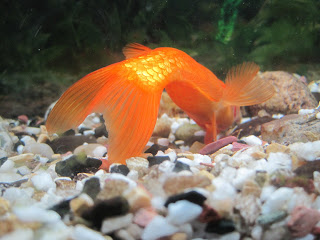 I'm a little surprised it survived the night, but it is still swimming a bit. No idea what is wrong with it, but we've had in depth conversations about death in preparation. It was a bit intense yesterday!
We also had a blast of 'home edding'- the interested questions.... It happens that way sometimes, a couple of days of playing and wham! Two hours of complex and detailed questions. So, we now know a lot more about Rosa Parks and Dr. Martin Luther King, that some people were (and are) treated differently just because of skin colour (Princess remembering Amelia King, who wasn't initially allowed to join the land army in WW2 in this country because of her skin colour- thats on the  Wartime Farm programmes), which continued for DH into swastikas (ancient and modern), Nazis, Germans being on the other side in both first and second World Wars, Prince Philip being Greek,and woolly mammoth hair (30 cm long on top, up to 90 cm long elsewhere).

Phew, I'm exhausted just trying to write it down. Looking at it, this isn't even a week, its only 5 days. I think we have actually been rather busy!