It started at 5 am, which I'm not good at, but apart from that its gone well.

Big girl wanted to make a Tofu and raspberry salad as seen in this issue of The Mother . She cut up and marinated the tofu, but then ran out of steam, full of cold poor thing. Little One stepped in and helped make the raspberry dressing above.
While they did that, I got some bread dough rising. I keep forgetting to make time for our bread, the bread machine is really helpful on work days but I think I should make it properly.
Anyway, by tea time the bread was done:

I made bread rolls yesterday for a picnic, but ran out of time so they didn't get cooked until teatime, and were burnt. Despite this they've mostly been eaten, so no pictures. I haven't cooked much with this oven, so I think I still need to get to know it.
Also for tea was broad beans. Now, DH has a long running thing how he detests them, and makes a big song and dance how he doesn't like them but will eat them under sufference. We rarely have them! Anyway, Big One now shares his distaste for them. Hrrmmph.Thankfully Little One was happily munching on them until interrupted so I could make broad bean, pea and cheese paste. Its very vaguely based on something Jamie O does involving parmesan and mint, but no parmesan in the fridge and the mint is growing at the other house, so its my own version. There's a clove of garlic, lemon juice and olive oil, and its fabulous, if I do say so myself. Big One gave it the thumbs up ' I like your broad beans mummy, I'll eat them in your cooking, just not on their own.'  It doesn't look like anything much, but honestly it was fab! 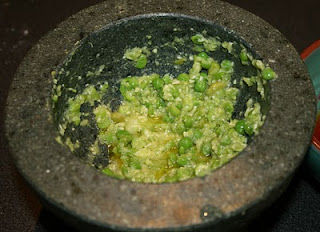 DH tried his own 'meal' with them, involving frying them with leeks and chickpeas. Pleasant, but broad bean flavoured. I'm not that huge a fan of them, but I do object to something being that maligned- garlic, lemon, oil (and for me, usually chillies) can make ANYthing taste good!
Finally, I got the duct tape out and made a rain cover for my bowl horse. Its been spending too much time in the kitchen getting sworn at ( it sticks its legs out to trip up DH, honest!) as I don't like to see it rotting in the rain-I haven't anywhere under cover outside to work or store it. We rig up a tarp over the yard depending on the need for dry clothes in the rain, but its too dark in the house if we leave one up all the time. 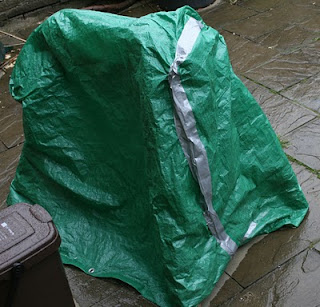 It got tested straight away with a little rain- seems to do ok but I worry it'll get mouldy if stored like that for long.
I've not mentioned my carving for a bit. I still have two bowls I'm working on, but I'm limited by one rather serious problem- I seem to slice myself as soon as I'm not using the horse to hold the bowl. I repeatedly cut the same finger in the same place, so I've got a technique problem. I'm struggling jamming the bowls in the horse securely and getting to where I need to work- using the horse its more a case of skinned knuckles rather than deep sliced fingers. I'm starting to figure out how I'm doing it though, so hopefully I'll figure out the questions I need to ask. It is putting me off though- its much less messy and painful if I do a different hobby. Did I mention the sight of my own blood makes me a bit faint? I've been fine for years in orthopaedic ( i.e. messy) theatre when I was in x-ray, fine with other folks blood, but my own makes me need a sit down!
I'm working on a tool roll for some the knives and chisels I have rattling around in the box. They all have covers, but it'll be handier to keep them in a wrap. The fabric is a scrap mum gave me, not exactly my choice but a good 'contrast' to the 'blokey' tools. It made me smile to think of using it- Especially if DH borrows it for the spoon carving course in September!  Pics will have to be another day for that.
Posted by abusymum at 00:47