Well, I'm off to a slow start here, mainly from not getting around to figuring out how to get pictures up on here. Or even off the camera! That's generally DH's department- so I've even had to ask him how to do something . I'm sure that's why its taken me over a month to get around to it, I've enough of him knowing he's right normally, without giving him an extra oppertunity!
I've not got far with my woodwork, but from my previous post- now replete with images! I have finished and oiled my wooden cup (I'm told its a kuksa), and finally found the chisels to try to level off my bowlhorse. The weather is getting to it and I reckon I need to get a move on unless I want to make another in the near future-a bit too much of a challenge without a workshop or wide selection of tools as yet, or wood!
I have been busy with the sewing machine though.
I made some curtains for the house we're selling- much quicker than trying to figure out wardrobe doors.

Nothing vaguely complicated, but I was pleased to have a functional practice at straight ( ish!) hems.
K's dress went very well, so I made one for J too- with a picture at the cutting out stage- then I forgot until it was finished. 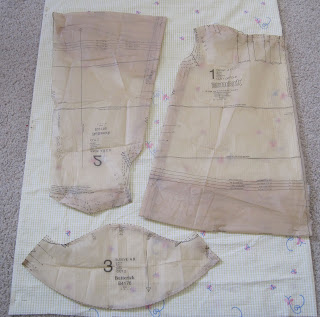 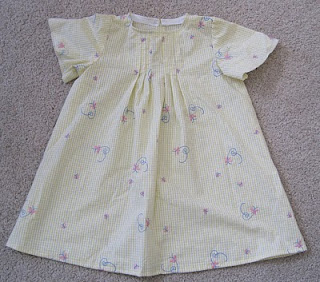 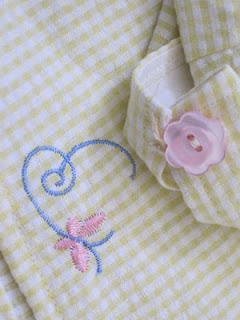 with a close up of the detail. K helped choose the buttons.
Not my work at all, but my Dad very kindly made a washing up stand for the girls from some worktop given to us by neighbours who got a new kitchen. 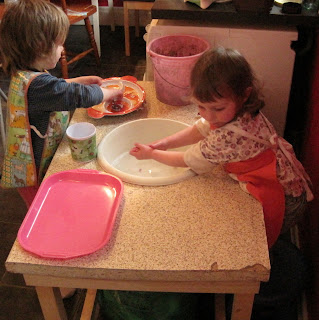 I haven't yet made the nappy covers I was thinking of, mainly due to J's not getting regular use these days. So, eventually I had the idea of making a waterproof seat pad- for in her carseat or pushchair so we don't keep insisting on nappies for certain places ( and then having a struggle to get J out of it!). The first one made with advice on design from Angela ,the teacher in my sewing class ( what an amazing lady, having the patience to teach us all!) and the second with a slight refinement.  Fluffy side up with PUL as the waterproof lower side. Made the perfect size to stuff with the nappy pads we've had on the go for the last 4.5 yrs.
I had to get the second made very quickly- sigh- J had something K didn't have. Of course.
I hope to get a few more made, but still have dreams of an ordinary cushion cover so I get to snuggle this very sunggly fleece! 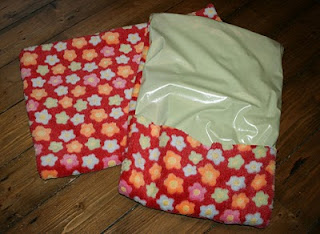 Well, i've thought of one good reason to have this blog.Writing about what I've been up to the last month or so- as well as being ill for a few weeks, and work,and doing a car boot sale, and trying to get a house ready to sell, and keep up with the allotment- its no wonder I get tired out!
Posted by abusymum at 22:26